The boats to go to Schonau am Königsee will reopen again on the 30th of Mai 2020.

How to get to the ice chapel in Berchtesgaden

Schönau am Königssee is the name of the small village that opens the way to the national park of Berchtesgaden, located right on the shore of Lake Königssee, in English “Lake of the King“.

To start the adventure, you will have to go to the lakeshore and look for the ticket office to get the tickets. Here you have two photos of the prices and schedules in English. The official tourism website is available in English and German as well. There is some other activities to do around Berchtesgaden.

Prices to Königssee for 2020 Timetables to Königssee for 2020

It will reopen after coronavirus crisis, 30th Mai 2020. So you can go on an adventure with your dog like I did with Morrison and enjoy nature in its purest state. The different hiking trails are marked with yellow signs and differentiated by colours to express the difficulty:

The road to the ice chapel, “Eiskapelle” in German, is medium difficulty. The route is approximately 3 kilometres. The climb will be a total of 830 meters high. It takes about 2 hours to get you there. Although the time is relative, since if you stop to take pictures or the weather conditions are not the most appropriate, you may not be able to reach the end of the route.

Since the heavy rains or the melting season make the streams water capacity way too full to get through it. This means that the access to the cave is not possible (as was our case). We were standing less than 300 meters from the cave, so we were not able to check the inside. We were almost the whole trip under heavy rain. Even so, it is worth the effort to visit the ice chapel. The views during the tour are impressive.

Keep in mind that in the majority of the park there is no cellphone service, so a small map, either paper one or a previously downloaded one on your phone, would be a great idea. Without a doubt, Morrison and I will try it again, this time, hoping to reach our final destination and see the inside. Hiking route to the ice chapel in Berchtesgaden

This is an interactive map (in the web version you can see it better) in which you can see the route from the starting point, where the boat leaves you, to the ice chapel. 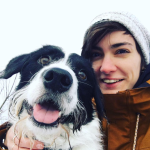 I was born 29 years ago in Barcelona.
I have lived in Lepe, Huelva, Toronto, Oxford, Rheinsberg and currently, I live in the frenetic city of Berlin.
In 2014 my adventure of discovering Europe began. Since February 2016, my faithful furry friend Morrison has been with me on the majority of my trips.

You may also enjoy: Hey! I'm Rachel. A mix from Barcelona and Huelva living la vida in Berlin with my dog Morrison. Don't lose track of our adventures around Europe. How to live with less plastic, and some tips about life in Germany.